I first learned about Sheila’s (in a red jacket) story from an article  published by the World Diabetes Foundation. Immediately after I read Sheila’s story, I felt the need to act fast and help this precious little girl. Every night as I put my daughter to sleep, I would wonder how Sheila was doing. I could not help wonder how her parents were managing her condition without any diabetes supplies and with an erratic supply of insulin. I contacted Naivasha hospital in Kenya and was referred to Sheila’s endocrinologist

Dr. Osborne Tembu. He confirmed that things had been very tough on Sheila’s family. I sent some of my daughter’s extra diabetes supplies to Kenya through Dr. Tembu to Sheila. When Sheila and her family received the supplies they were overjoyed and extremely grateful and tried to contact me through Dr. Tembu’s cell phone to say thank you.
I WAS OVERJOYED WHEN I RECEIVED THIS EMAIL FROM DR. TEMBU EXPLAINING HOW THE METER AND SUPPLIES HAD HELPED SHEILA’S MOTHER TO TRACK HER DAILY NUMBERS AND THAT HAD HELPED THE DOCTORS IN ADJUSTING HER INSULIN INJECTIONS.

“From: osborn tembu Sent: Fri 6/13/08 11:44 AM To: Wambui Githire (wambui_githire@hotmail.com) Hi Wambui, I was over at naivasha today to sum up my research, Sheila came over for her check up today.  Her mother had taken daily sugar levels as i had instructed her and charted for a whole month since her last visit. This has really made it easy for us to make decisions and to educate her mother on how to adjust the insulin injections as per the readings. I also got the parcel sent by your friend, pliz thank her for me,the resources sent are very helpful,I  just started viewing some of it before recommending it for the patients and it is good stuff. John also came over today with three of his siblings, I handed over the glucometer to him and took him through how to use it, he was clearly overjoyed,however it only had 10 strips,which if used for daily sugars for the 3 would only last them 3 days. He has been asking me to try get him a job but clearly it’s been difficult, at 18 he is having to help fend for his family together with his dad, he has requested to be helped to take driving classes that way he could try get a job himself. He needs help.”
In 2010 my daughter Njeri and Shiru and myself met Sheila and her mother in Naivasha hospital as shown in this picture and we gave her some diabetic supplies as well bought her insulin. 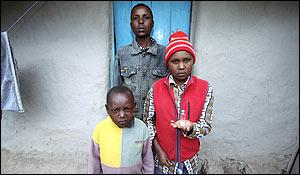 We met Anthony Wainaina when he was 14.  He was diagnosed with diabetes in early childhood too. His older brother John and his sister would share one syringe because they could not afford 15 Kenya shillings for a syringe. John worked menial jobs to support his siblings who quit school due to diabetes related complications. Anthony had too many lows that he couldn’t stay in school and Leah developed eyesight problems. 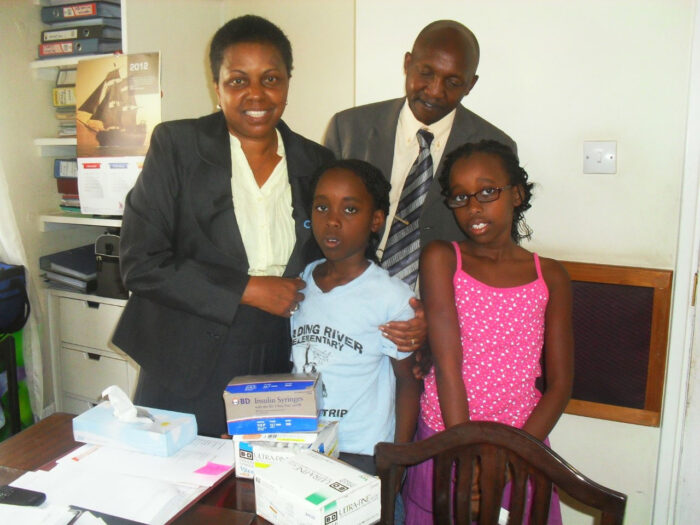 When the then Director of Kenya Diabetes Management the late Mrs. Eva Muchemi, heard about HADIA and our work, she was very happy to partner with us.  In 2011 on one visit to Kenya, she received diabetes supplies from Njeri and her twin sister Shiru to give to needy diabetic children.

Enable the poorest of the poor escape poverty permanently.